La Tomatina is a food fight festival held on the last Wednesday of August each year in the town of Bunol near to Valencia in Spain. Thousands upon thousands of people make their way from all corners of the world to fight in this ‘World’s Biggest Food Fight‘ where more than one hundred metric tons of over-ripe tomatoes are thrown in the streets. In 2012, 50000 people crammed into this huge tomato fight, greatly expanding Bunol’s normal 9,000 person population.

At around 11am many trucks haul the bounty of tomatoes into the centre of the town, Plaza del Pueblo. Technically the festival does not begin until one brave soul has climbed to the top of a two-story high, greased-up wooden pole and reached the coveted ham at the top. In practice this process takes a long time and the festival starts despite no one reaching the meaty prize. The signal for the beginning of the fight is firing of water cannons, and the chaos begins. Once it begins, the battle is generally every man for himself. 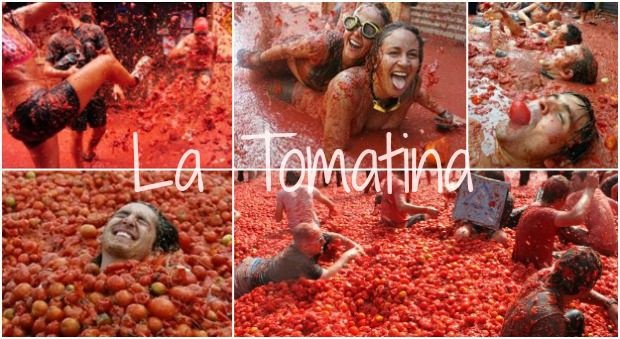 After an one hour the fighting ends. At this point, no more tomatoes can be thrown. The cleaning process involves the use of fire trucks to spray down the streets, with water provided from a Roman aqueduct. The authorities seem more concerned with cleaning the town than cleaning the visitors, so some people find water at the Bunol River to wash themselves, although some kind residents will hose passers-by down. Once the tomato pulp is flushed, the ground is clean due to the acidity of the tomato.

Watch the video to have more information about the Tomatina and practice your Spanish.